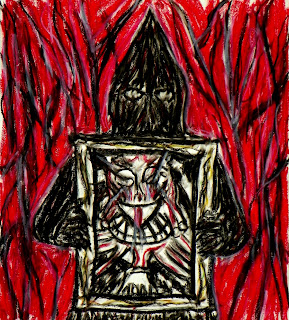 I have long wondered why in this world we continually see gross complacency, in the face of blatant oligarchy, and encroaching fascism. Why many of us feel lost as what to do. Why we try to go on living as if this situation is quite normal, and we know something is wrong, and there is this feeling of emptiness like a piece is missing from our soul. We debate on things we are fed like Left vs. Right, and whatever the latest media hype, or how to fix this or that by just shifting pieces around the board without looking at who made this game and why do we have to play it in the first place?

Recently in Hypnogogic states, I have had imagery and visions come to me, which in a sense could be symbolic but may also be be very real, and I hold the belief that symbols are real and alive as well dreams and visions existing in their own plans of reality.

I saw myself as a child, it could be myself as a child or anyone. I was taken out of a daycare/classroom by a teacher's assistant or helper and down a hallway. We entered a room which looked like a study or library and I was put in a chair. Suddenly the room was filled with vey old decrepit people. Despite their condition, I could sense they had strange powers and some malevolence. They frittered about the room and I began to feel drugged and hazy. A door opened, it seemed from the wall, where there wasn't one. And now what appeared to be the leader of these elderly looking creatures. It seemed to be both very tall and extremely short, like looking through a moving magnifying glass or funhouse mirror. Also the old one seemed both male and female, undefined.

This figure then shoved it's gnarled dry fingers into my mouth reaching around for something, while the others moaned and chanted.I can feel the dry yellowed fingernails scratching around. It them pulled what felt like a part of life force (Ba?) and stretched it's hand backwards toward another figure now emerging from the shelves/wall/doorway. This entity was dressed a black hood and robes and held a mirror in front of himself. The mirror frame was strangely festive and archaic. Perhaps the mirror it held was even a part of itself? The reflection was at once of the room I was in and also another place which was inside the mirror, black and white squares seemingly enfolding on each other.

Then the bizarre congregation of elderly things gathered round chanting increasingly in odd rhythms and shifting dynamic ranges. A horrible slurping sound and something like a cackling laugh came from within the frame. The black hooded person propped the mirror up further to itself.Now a monstrous being appeared in the reflection, like a vampirous clown, hungry and evil- the old leader then threw off a bluish substance from it's hand it had taken out of my mouth. And into this demon's mouth, the voracious glee and atrocious disgust it permeated was overpowering. It slurped down the etheric gel in ravenous insanity.

The reflection went black like a TV had been shut off. Black robe vanished, and a second later the ancient congregation also. The leader stayed for a moment moaning in unintelligible language, and slow backwards laughs. Grasping my head in it's wretched hand just to look at what it may have done and then warped out of sight.

The quality of the room changed, afternoon light came in. The door I came through opened and the assistant lady got me up and led me back through the hallway. I felt dizzy and odd.
On other days other kids were taken, one time the lady aid something like, "All you kids have to go."

The regular teacher would leave, sit as if in trance, or just not pay attention at all to this activity.

I theorize that the children are left with the Ka-animating force but part of their Ba-spirtual force is fed to the mirror thing which in turn gives power to the old looking beings. I also think at times the children and also adults are monitored by different beings in these beings various stages of incarnation, may be manipulating the life and spiritual energy like farmers, or scientists. Another image I had was being laid down on a table in a garden shed while a group of blue beings stood around me. And another was of the old creature leader with a serpent body and it's "old human" face grafted on to the snakes head talking in backwards slow motion like sounds.

While this all could just be a mix of subconscious archetypes, with influence of films, and books etc.
I believe it to be quite possible a manipulation of our will happens on more than just one or two levels, and this can directly relates to the state human beings find themselves in this society today.


Gorilla's Groping in the underworld, to siphon the milk of mystery!-at the precipice of feasting teeth! Which side of the black cube will define this sex-like death?
An erotic/psychotic journey by Brandon Lord Ross
Posted by Brandon Lord Ross at 7:31 PM No comments: